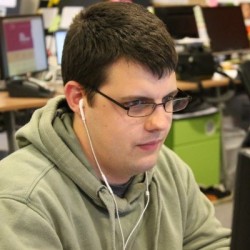 Oliver Davies has been building websites since 2007, and specialising in PHP and Drupal since 2008. He is currently a Senior Developer at Appnovation Technologies, is a Drupal 7 and 8 core contributor, and a provisional member of the Drupal Security team. In Oliver’s spare time, he enjoys spending time with his family, co-organises the Drupal Bristol and PHPSW user groups, and is a DrupalCamp Bristol committee member. You can follow him on Twitter at @opdavies.

Drupal 8 was (finally) released on November 19th 2015, after almost 4 years of work and code commits by over 3,200 different contributors. Whilst it’s pretty much the same as the Drupal that we know and, hopefully, love, a lot has changed behind the scenes and under the hood!

In this talk, Oliver will highlight some of the new features and improvements in Drupal 8, and discuss some of the benefits to Drupal site builders, themers, and module developers. Oliver will also talk about some of the non-technical changes and the cultural shift from “not invented here” to “proudly found elsewhere”, and how we are rejoining the PHP herd.

« Back to the schedule